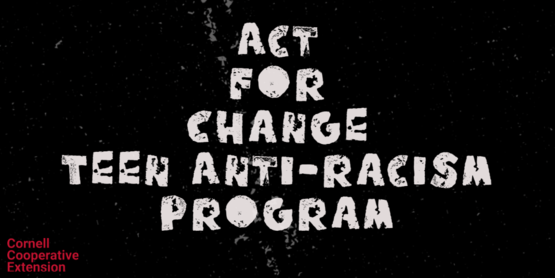 CCE is committed to creating and sustaining a culture of belonging.

Are you a teen 13+ that wants to be part of meaningful dialogue about race and racial identities? The Act for Change Teen Anti-racism Program uses peer dialogue to challenge racism and racist structures and builds bridges across created differences. It is unlike other anti-racism programs in that it relies on the input and participation of its teen participants to drive change. The program engages through breakout rooms, games and polls, short video clips to discuss, and more. Teens will be given tools to act for change the community in which they live, and participate in a final showcase.

Applications are accepted on a rolling basis. We are working with Cornell students to facilitate a cohort virtually in late winter/early spring 2022, most likely on Tuesday evenings starting in late March.

We've curated a webpage of resources to aid our work on creating and sustaining a culture of belonging at CCE. Please share and check back often!

We'd like to share the contributions of black individuals who helped to set the standards for Cooperative Extension.