Check coop for major drafts. You need ventilation along the top of the coop to let the warm air out. If you make the coop airtight the warm air will stay and the respiratory viruses can breed.

Do not provide a heat lamp. If you haven’t had one out there this year, this is not the time to start. The birds have many adaptations to the cold, and if they have been allowed to acclimate properly, they will be just fine.

Frostbite can happen, especially if you have a rooster with a large comb. Ensure the poultry have deep bedding in their coop and around their active area to get their feet up out of the snow and to insulate the bottom of the coop.

Don’t let the water freeze! Chickens drink more often than humans and they need that water to digest their food and keep them warm. Food and water go hand in hand and they must have both in this weather to survive.

Keep them on their appropriate ration. Keep giving them their regular feed. This is not the time to cook them a steak and feed it to them.

Don’t let eggs freeze in the nests. Check multiple times per day as broken eggs will produce a dangerous mess that will be difficult to clean when frozen.

Check out these links for more details:

How does the avian influenza virus spread in birds?

What are the signs of illness of birds infected with avian influenza?

What kind of test is used to diagnose avian influenza in birds?

What should I do as a poultry owner to protect my flock? Who do I call if my birds show symptoms of bird flu?

Coccidiosis is one of the oldest and most widely known parasitic diseases of poultry. Coccidiosis is caused by protozoans (a type of microscopic one-cellular animals) known as Eimeria that invade the cells in a chicken's or a turkey's intestine. The bird's ability to absorb nutrients suffers, which results in loss of weight or death. Coccidia can also damage the immune system and leave poultry more vulnerable to pathogens like Salmonella.

Each Eimeria parasite is able to infect only one host (for example, chicken or turkey, but not both), and they each attack different parts of the intestine in their specific host. These protozoan parasites are particularly difficult to combat because several different species of Eimeria exist in the field. Poultry may develop immunity to one type, but become infected with a different species because the immunity that develops after infection is also specific to only one species.

Coccidiosis organisms develop little eggs (oocysts) in the intestine that are passed in the droppings and can then infect other poultry in the same pen. If birds are held on wire floor, they cannot get in contact with droppings and will generally remain free of coccidiosis. Wet litter and warm temperature induce a heavy coccidiosis infection in the litter. That's why many coccidiosis outbreaks occur in the springtime (May, June).

Many avian diseases, including coccidiosis, are currently controlled by drug therapy. Producers add a number of anticoccidial drugs (coccidiostats) to commercial feed to combat the problem. Preventively, drugs are given in the chicks starter and grower feed, from day-old until 12-15 weeks of age. However, they are increasingly ineffective as drug-resistant coccidia strains rapidly develop.

All of the observed effects of coccidiosis are related to disruption of the epithelial cells lining the intestine by the release of parasite stages. While infection with high doses of some Eimeria species (E. tenella, E. necatrix) may cause death to chickens, usually the effects are insidious and are not apparent to the poultry farmer until the chickens are sent to market. The main effects that cause economic losses are a decreased weight gain due in part to the malabsorption of nutrients through the gut wall. This effect causes an increased feed conversion ratio, which is the amount of feed converted into body weight, because feed that is consumed is used inefficiently. Chickens that are infected with high levels of coccidia display symptoms such as droopiness and emaciation and may never achieve weight gain equal to their uninfected counterparts.

If chickens appear sick and ruffled from coccidiosis, get a diagnosis at a diagnostic laboratory. It can be made quickly and medication started immediately. Contact your county extension office for information about Cornell diagnostic services. 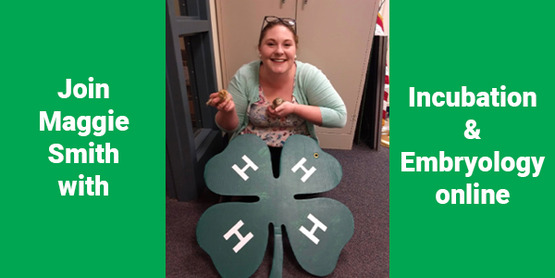 “Incubation and Embryology Online” will be separated into two 15-20 minute video recordings twice a week and will be viewable on Cornell Cooperative Extension Orange County’s YouTube Channel, social media accounts and on this webpage. Videos will be launched Tuesdays and Thursdays at 11:00 A.M. Click here to view the videos!