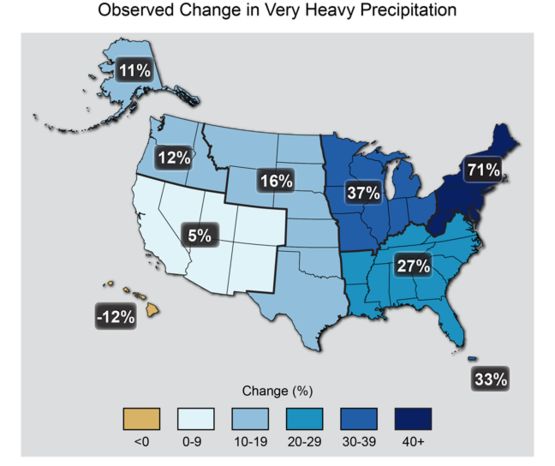 Human communities (our infrastructure and development patterns) and the natural ecosystems we depend upon are all adapted to historical precipitation patterns. Those patterns are changing. The dominant trend in precipitation throughout the Northeast United States, including Ulster County, has been towards increases in rainfall intensity (heavy downpours) and further increases in rainfall intensity are expected.

This map shows percent increases in the amount of precipitation falling in very heavy events (defined as the heaviest 1% of all daily events) from 1958 to 2012 for each region of the continental United States. Adapted from: Global Climate Change Impacts in the United States.

Change in the amount of precipitation, both observed and predicted, varies across the seasons. The largest increase in precipitation has been observed recently in the fall (a 15% increase in the Northeast). Projected changes by the end of the century are less certain in summer and fall, and for the entire year. Although winter and spring precipitation is projected to increase.

In addition, hurricanes are anticipated to become both more frequent and more intense in the future, with greater amounts of precipitation.

The mechanism driving these changes is well understood. Warmer air can contain more water vapor than cooler air. Global analyses show that the amount of water vapor in the atmosphere has in fact increased due to human-caused warming. This extra moisture is available to storm systems, resulting in heavier rainfalls.

Shifts in the volume and timing of streamflows can be critical to aquatic species, existing human infrastructure, and water quality and quantity for drinking water supply. Some aquatic species are particularly vulnerable to temperature and streamflow changes, including stream invertebrates, freshwater mussels, amphibians, and coldwater fish.

In Ulster County, the period from 1996-2011 was uniquely wet and extreme. The fall of 2011, which experienced rainfall from Tropical Storm Irene was unique – the one to five day event was in the top three on record for streamflows (source: Allan Frei, Department of Geography, Hunter College).

Ulster County is directly connected to the Atlantic Ocean through the Hudson River Estuary, creating an “arm of the sea” and a tidal coastline in the county. As a result, the coastal portions of Ulster County, including the estuary shoreline and tributary mouths, are affected by sea-level rise.

Projections for the Northeast suggest that sea-level rise will be greater than the global average of approximately 0.12 inches per year. The latest projections (2017) project sea-level rise of 2 feet and 4.5 feet on average in the region by 2100 for low and intermediate emissions scenarios, respectively. The worst-case scenarios project that sea levels will rise upwards of 11 feet on average by the end of the century. Sea level rise of two feet, without any changes in storms, would more than triple the frequency of dangerous coastal flooding throughout most of the Northeast. 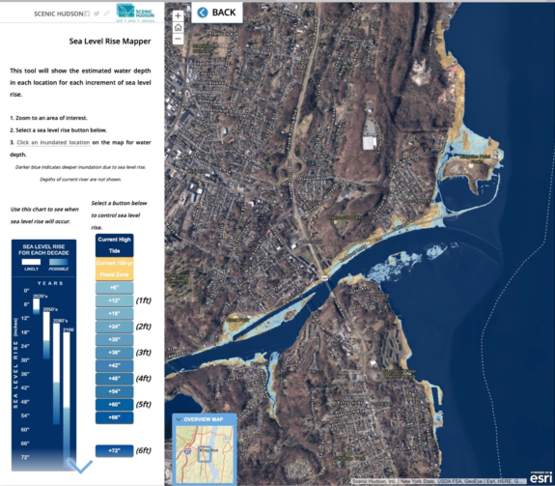 The Northeast is seeing greater than average sea level rise due to changes in the ocean and atmosphere, thermal expansion, ice melt contributions from Greenland and Antarctica, and ongoing land-mass subsidence in the region due to tectonics and effects such as groundwater withdrawal.

The Sea Level Rise Mapper (seen here) is a tool that Hudson River communities and stakeholders can use to create visualizations and future scenarios of sea-level rise. The data and mapping products are a combination of results from new analyses by Scenic Hudson and existing data from a variety of sources including NYS DEC, US EPA, US Census Bureau, Dr. Roger Flood (SUNY Stony Brook) and FEMA. Data layers include submerged aquatic vegetation, shoreline types, and tidal wetlands.

Climate projections indicate the ocean over the Northeast Continental Shelf will experience more warming than most other marine ecosystems around the world. Species that are already endangered and federally protected in the Northeast – Atlantic sturgeon, Atlantic salmon, and right whales – are expected to be further threatened by climate change.

A species vulnerability assessment indicated that approximately 50% of the commercial, forage, and protected fish and invertebrate species on the Northeast Continental Shelf will be highly or very highly vulnerable to climate change through 2050 under a higher emissions scenario. Species population models projected for future ocean conditions also indicate declines of species that support some of the most valuable and iconic fisheries in the Northeast, including Atlantic cod, Atlantic sea scallops, and American lobster.

Reducing the Effects of Climate Change

What CCE Ulster County is Doing

Hurricanes Irene and Sandy demonstrated the region’s vulnerability to extreme weather events and the potential for adaptation to reduce impacts. Hurricane Irene produced a broad swath of very heavy rain (4 to 12 inches in Ulster County and 2 to 3 inches per hour in some locations) from August 27 to 29, 2011. These heavy rains were part of a broader pattern of wet weather preceding the storm that exacerbated the flooding. The highest rainfall totals were observed in the Catskills region.

In response to record-setting riverine flooding that caused widespread damage, municipalities in the Catskills region developed a comprehensive flood mitigation program to recover from Irene and prevent future flood damages. CCE Ulster has been a key partner in the delivery of this program in Ulster County.

Sea Level Rise: What is Expected for New York

FEMA Homeowners Guide to Retrofitting This guide is specifically for homeowners who want to know how to protect their homes from flooding.

When flooding hits close to home… Who can you call?

How do I prevent erosion and stabilize the stream bank? What do I do when my property has been damaged by flooding? Do I need a permit? These handouts guide landowners in answering these questions, and include technical and regulatory contacts that can help in each target region of the Mid-Hudson Valley.